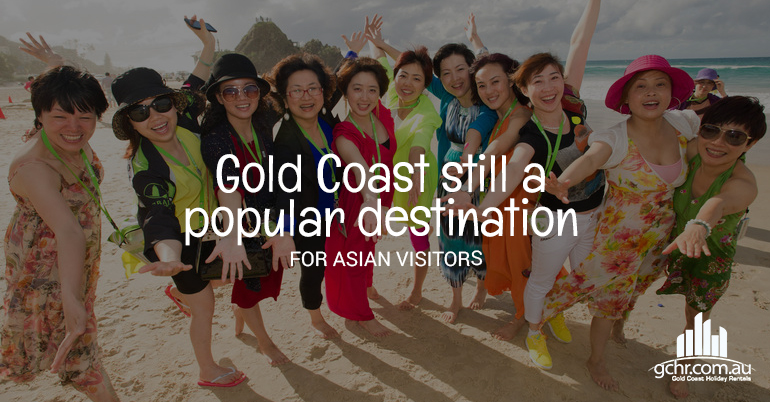 Many tend to think that Australia, especially the Gold Coast, is popular only among visitors from Europe and America. That’s not true at all. As I mentioned in earlier posts about international travellers, we are a hit with Asian visitors above all else.

But of course, we’re talking about Australia in general. How does the Gold Coast fare in terms of international travellers, especially Asian visitors? I personally welcome many Asian guests who book to stay in Gold Coast resorts with us here at HRSP.com.au, so I thought I’d look into this deeper to see if I can find some solid statistic.

The Gold Coast has long been a popular tourist destination for our Asian neighbours, and this remains to be so looking at the 2014 Gold Coast Regional Snapshot just released by Tourism and Events Queensland.

According to the report, the Gold Coast leads in terms of international visitors, which grew to more than 5% in 2014 or around 800,000. The biggest sub-group is the holiday travellers, which make up a whopping 13.4% increase than 2013.

And as a provider of Gold Coast resorts, what really interested me was that most of these international visitors stay on the Gold Coast up to 10 nights, perhaps trying to maximise their time in the area, and I don’t blame them!

Who are our popular Asian visitors?

Our biggest market, whether we’re talking about Asia or otherwise, is China. In fact, welcome more visitors from China than New Zealand, which is only a relatively short flight! (I’m actually surprised with the ranking.) The number of Chinese visitors has just increased to almost 4.5%. Those who stayed at least overnight also grew to around 15%. New Zealand travellers have also increased over the past year, but it still comes short to that of China.

And the government is already working closely to ensure that we’ll be able to retain this rapidly growing market. In an article published in More Gold Coast, they have already set up an East-West dialogue so both countries can talk about how to incorporate the city to the “Chinese dream.”

The report didn’t mention why China ranks first place, but one of the possible reasons is the burgeoning casino industry here. There are a growing number of wealthy Chinese travellers looking outside their country not only for gambling but also for entertainment and shopping opportunities.

Japan, meanwhile, is in the fourth place, right after UK, with an increase of 3.3% or 56,000. This basically explains why there are so many Japanese restaurants all over the Gold Coast today, including those that offer fine-dining settings. (My personal favourite is FuKu at Niecon Plaza!)

The next 2 places are still occupied by Asian countries, which are Singapore and Malaysia, respectively. The Gold Coast has experienced a growth of 3.3% in terms of its Singapore market, but the biggest jump of all is in the Malaysian market, which soars to over 40%! That’s huge!

Again, we can only speculate, but I think that cheap direct flights have helped greatly. Singapore, on the other hand, is a very small country, and it’s understandable if its residents prefer to fly somewhere else if they want to go on a holiday.

The other Asian countries that made it to the top 10 international source markets list of the report are India, Hong Kong, and Korea, which took the last place. India has an impressive 28.4% increase while Hong Kong market went up to more than 15%.

Although our Korean market still remains strong, it experienced a rather large decline last year, when the number of visits dropped by over 36%. If there’s any consolation, it’s the fact that this is the only country in the list that had a negative change, which means all the others increased.

Aside from New Zealand and the UK, USA is another non-Asian country that made it to the list with a moderate growth of about 13% or 28,000.

If we’re going to compare our international visits to other key areas in the region, the Gold Coast ranks no. 2 next to Brisbane, which is already our capital. I am personally proud of that because it’s not easy for a city to come very close to capital cities with regard to number of tourists. The difference between us and Brisbane, in terms of numbers, is also quite small: 810,000 and 967,000, respectively. Best of all, while visits to Brisbane declined by 1.5%, while the Gold Coast increased 5.5%.

The Gold Coast is going head to head against hundreds of other well-known and beautiful cities in the planet therefore tourism and infrastructure in the region is continually changing. There’s still much to be done by the Gold Coast government to enhance the tourism industry further, but it’s constantly changing and getting bigger and better each and every year.

Nevertheless, in every challenge is an opportunity, and that is to continue to capture and maintain our Asian markets. For our Asian friends, if you’re looking for amazing and affordable accommodation when in the city, contact HRSP.com.au. For just $150 per night, you can enjoy the best Gold Coast resorts staying at the likes of Moroccan Resort and Chevron Renaissance. What are you waiting for? Plan your Australian holiday today and be sure to include the Gold Coast on your itinerary. We look forward to welcoming you as our guest.